History of the Bell Tower

Historical Development
There has been a church building in Pontefract Market Place since at least the 12th Century, when a chapel-of-ease, St. Mary’s in the Market Place, was built by the Norman baronial de Lacy family and used by the monks of St Johns Priory, Pontefract. The original building was enlarged over the centuries and the name changed to St. Giles.

As its congregations grew, the church was subjected to a number of alterations and additions as evidenced by the various styles that exist today. About 1350 the North Arcade was constructed and 200 years later the Chantry Chapel (at the east end) was incorporated into the main body of the church having previously been physically separated from the present Chancel.

In 1649, after the Civil War, the interior was adapted for worship in accordance with Puritan ideas including the provision of 5’ high partitions separating “box-pews” and other alterations aimed at transferring the previous Gothic Church into a preaching hall focused on the pulpit rather than on the High Altar.

Again, to meet the need for increased congregations, the gallery in the west end was built in 1740 (commemorated by the painting of the coat of arms of George II which is still to be seen on the west wall) and at the same time a gallery was constructed over the North aisle. In 1770 the south wall was removed and a south aisle and gallery added. The classical pillars constructed at this time failed to match the pillars on the north aisle built some 400 years earlier, due to the need to raise them on brick pediments level with the top of the pew-boxes. At this time the first organ was installed in the west gallery.

In 1789, by Act of Parliament, the Chapel of St Giles became the Parish Church of Pontefract when a charter was granted by King George III. In 1795 more additions to the building took place the most significant being the construction of the present classical-styled tower. 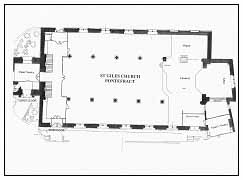 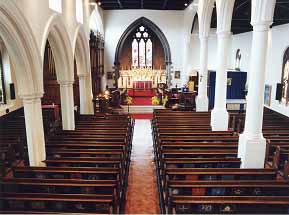 During the Victorian period (1825), the main entrance was moved from the middle of the south aisle to its present location near the west end and a vestibule created. Major alterations in 1868 to lower the Chancel roof to the same level as that over the nave necessitated Divine Service to be held, temporarily, under license in the Town Hall. In the same year the pew-boxes were removed and replaced by the present deal pews and the Sanctuary was completely rebuilt by the lay Proprietor, the Earl of Harewood. In 1882 plaster from Georgian times taken from the ceiling of the Nave revealed the previous wooden ceiling, which was then repaired and preserved. In 1895 the present organ was installed and most of the stained glass windows date from this period. In 1902, the font was moved from the east end of the south aisle to its present location.

For several years St Giles served as the garrison church for the soldiers quartered at Pontefract Barracks. When compulsory church parades were abolished the galleries over the north and south aisles were no longer needed and in 1948 were removed thus allowing much more light into the building.

The Chapel of the Blessed Sacrament at the south east corner of the church was created during the 1960’s and remained until the major internal alterations took place in 2012. Major restoration works to strengthen the structure of the tower were undertaken in the 1990’s and the church roof was completely refurbished in 2000 in readiness for the major internal alterations throughout the whole of the building which eventually took place during 2011 – 2013.

The historical developments and structural changes to the church building were made to satisfy the increasing demands for accommodation and styles of worship. Consequently, although the church has a long and interesting history, the architecture is both varied and undistinguished.
Internal alterations 2011 – 2013

The refurbishment project, led by John Cunnington of Derbyshire-based Walker Cunnington Architects, involved extensive internal alterations with a new level stone floor with underfloor heating to the ground floor and a structural steel frame to support the new first floor at the west end. All alterations were designed to minimise the impact on archaeology and existing historic fabric.
Treske of Thirsk, North Yorkshire designed and made the 163 St Wilfrid chairs and armchairs, two Deacons’ chairs, one president’s chair, together with a lectern, six servers’ stools, six benches for the choir, four choir frontals and four choir readers. The beautifully-finished chairs, which replaced the traditional wooden pews, are made from lightly fumed oak with rush seating.

The overall refurbishment of St Giles’ Church, which has been funded by a number of different grants and parish-giving initiatives, has already won awards, including the Pontefract Civic Society annual design awards and the 2014 RICS Pro Yorkshire Award for Building Conservation. St Giles’ now stands as a fine example of how to enhance historic churches to keep them active places”.
St Giles Centre
St Giles’ Church has always been a fundamental part of the community of Pontefract from the time when it was first built in the 12th century, providing sanctuary and a place of worship. The comprehensive refurbishment of the church in 2011 – 2013, carried out with skill and love and incorporating the St Giles Centre will ensure that it remains a pivotal part of Pontefract life for generations to come.
The Centre has an attractive and inviting reception area leading to a multi-purpose café area and fully equipped kitchen, toilet facilities on both floors and four meeting rooms on the first floor. With wireless broadband access available in all rooms and high accessibility for wheelchairs and prams, the Centre aims to make a real contribution to local community needs and to assist in the regeneration of the town by attracting more visitors and supporting local heritage education. The Town Centre Masterplan considers St Giles’ to be “one of the jewels in Pontefract’s historical offer, with an important role in supporting the local community. For more details about the Centre click on the link on the home page or visit www.stgilescentrepontefract.org.uk

St Giles Church today – Important Features
St. Giles Church is the dominant feature of the town’s Market Place, and is often referred to as ‘The Church at the Heart of the Town’. Its unique, octagonal tower, visible from miles around, proclaims the Glory of God to the people of Pontefract and visitors to the town.
St Giles Church is a Grade II* listed building, situated within the Pontefract Town Centre Conservation Area. There is no churchyard attached to the church. 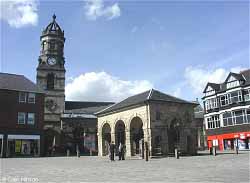 St Giles at the heart of the town seen from the South with the Buttercross in the foreground. 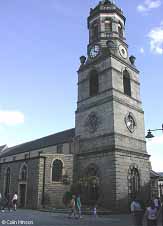 The octagonal tower and north elevation seen from the north west.

The bell tower replaced an earlier tower and spire in 1790 and has a peal of of 10 bells and a striking octagonal clock tower. The unique design includes a crown spire similar to those found in Newcastle Cathedral, Edinburgh and St Andrews. It was designed by Thomas Atkinson of York, deputy to John Carr.

The church is mainly Georgian in aspect although foundations of the Norman chapel have been discovered. The existing North Arcade is believed to be of 14th /15th Century origin.

These arches with quartifoil pillars are the oldest remaining part of the church. The base of the supporting pillars can be seen below existing floor level. The second pillar from the front was cut to fit a tall pulpit in about 1650.
The Nave will accommodate a maximum of 250 worshippers in lightly fumed oak chairs with rush seating which replaced traditional wooden pews removed during the major alterations in 2012 although the “Mayor’s Pew” which also accommodates the brass holder which held the Mace and the pews with carvings reserved for the commanding officer of the local garrison have been retained and placed adjacent to the north and south aisle walls.
During the reconstruction of the floor in the Nave and Aisles, the sites of 30 graves were found, dating from during the Civil War when the All Saints’ graveyard was not available. The new floor is in York stone. Each of the 164 oak chairs was sponsored: many in the memory of a loved one. The chairs allow flexibility for services, exhibitions and concerts.

The tall Nave has distinguished 16th Century Tudor ceiling timbers which were once hidden under white plaster. In 1860 this was removed and the 12 bosses, made of papier mâché, were installed at the expense of Mr Tew (whose banking firm in Market Place became Barclays in 1906).

A number of memorials are located on the north and south interior walls and the west wall accommodates the Royal Coat of Arms of George II commemorating the construction of the West Gallery in 1740.

The Sanctuary Chapel was previously part of the Chantry Chapel built around 1300 AD. It was demolished and replaced with the Sanctuary in 1868/69 by the Earl of Harewood, the Lay Proprietor.

The memorials in the St Oswald’s Chapel commemorate members of the armed services from the Barracks and from Pontefract who have given their lives for their country since 1879. A copy of the Pontefract Roll of Honour for 1914-18 is on the altar. Troops at the Barracks marched to St Giles’ every Sunday morning from 1879, for about 70 years.

The Organ by Binns of Leeds was installed in1894, refurbished in 1954 and completely rebuilt in 2003. It is considered to be one of the finest organs in the North of England. Previous organs from 1774 onwards were located on the rear gallery and where the Lady Chapel is now.

The Lady Chapel in the south aisle has a statue of the Virgin Mary was made in 2012 by the monks and nuns of La famille monastique de Bethléem in France. Behind this altar are the vestries and a section of medieval wall from the first chapel. Candles on the tray in the chapel are lit by visitors to signify continuing prayer or to remember loved ones.

The Stained glass East Window by Kempe of London (1879) showing (from left) Jesus at his Resurrection on Easter morning, His Transfiguration and His Ascension to Heaven. The rose window to the left may also be by Kempe.

The New Altars in the Sanctuary and Lady Chapel are made of Portland stone and were blessed by the then Bishop of Pontefract, Tony Robinson in a special service in June 2013. Each altar contains a religious relic. The church was rededicated the following November, after the two year period of reordering.
The South Aisle Pillars The base of the original Norman pillars and arches on the south side of the nave have survived below the floor. The original arches were demolished and replaced in 1400. The rectangular bases to the pillars show the height of the wooden box pews built in about 1650.

The solid oak Choir Stalls and Sanctuary furniture made by Treske of Thirsk, North Yorkshire were installed in 2012 replacing the 1902 ash stalls. The St Giles Choir is regarded as one of the best parish church choirs in Yorkshire.

The Font is believed to be over 550 years old dating back to late Mediaeval times. Its origin is unknown.

The stained glass windows are fine examples of Victorian stained glass and depict biblical passages. They are dedicated to long serving Vicars and members of notable Pontefract families.

The Eagle Lectern in St Oswald’s Chapel was given by the Reverend James Rhodes of Carlton to commemorate the re-opening of the church following the last major restoration of the interior of the building in 1869
.
The Gallery at the west end replaced an earlier galley that also extended along the north and south aisles of the nave from 1740 until 1948 which was used by soldiers from the Barracks.